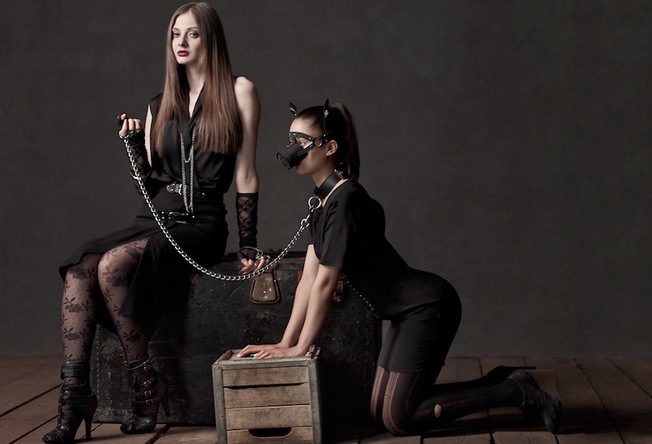 BDSM actions can often take place during a specific period of time agreed to by both parties, referred to as "play", "a scene" or "a session". Participants usually derive pleasure from this, even though many of the practices—such as inflicting pain or humiliation or being restrained—would be unpleasant under other circumstances. Explicit sexual activity, such as sexual penetration, may occur within a session, but is not essential. Such explicit sexual interaction is seen only rarely in public play spaces, and it is sometimes specifically banned by the rules of a party or playspace. Whether it is a public "playspace"—ranging from a party at an established community dungeon to a hosted play "zone" at a nightclub or social event—the parameters of allowance can vary. Some restrict a policy of panties/nipple tape for women (underwear for men) and some allow full nudity with explicit sexual interaction allowed.

Some BDSM practitioners prefer a code of behavior that differs from "SSC" and is described as "risk aware consensual kink" (RACK), indicating a preference for a style in which the individual responsibility of the involved parties is emphasized more strongly, with each participant being responsible for his or her own well-being. Advocates of RACK argue that SSC can hamper discussion of risk because no activity is truly "safe", and that discussion of even low-risk possibilities is necessary for truly informed consent. They further argue that setting a discrete line between "safe" and "not-safe" activities ideologically denies consenting adults the right to evaluate risks vs rewards for themselves; that some adults will be drawn to certain activities regardless of the risk; and that BDSM play—particularly higher-risk play or edgeplay—should be treated with the same regard as extreme sports, with both respect and the demand that practitioners educate themselves and practice the higher-risk activities to decrease risk. RACK may be seen as focusing primarily upon awareness and informed consent, rather than accepted safe practices. Consent is the most important criterion here. The consent and compliance for a sadomasochistic situation can be granted only by people who can judge the potential results. For their consent, they must have relevant information (extent to which the scene will go, potential risks, if a safeword will be used, what that is, and so on) at hand and the necessary mental capacity to judge. The resulting consent and understanding is occasionally summarized in a written "contract", which is an agreement of what can and cannot take place.

In general, BDSM play is usually structured such that it is possible for the consenting partner to withdraw his or her consent during a scene; for example, by using a safeword that was agreed on in advance. Use of the agreed safeword (or occasionally a "safe symbol" such as dropping a ball or ringing a bell, especially when speech is restricted) is seen by some as an explicit withdrawal of consent. Failure to honor a safeword is considered serious misconduct and could even change the sexual consent situation into a crime, depending on the relevant law, since the bottom has explicitly revoked his or her consent to any actions that follow the use of the safeword. For other scenes, particularly in established relationships, a safeword may be agreed to signify a warning ("this is getting too intense") rather than explicit withdrawal of consent; and a few choose not to use a safeword at all. This is sometimes the case for "punishment scenes" between master/slave couples or for some extreme or edgeplay scenes which may include abductions, rape play, or interrogation. This scene dynamic may be referred to as "consensual nonconsent". In some scenes or relationships it may be impossible for consent to be withdrawn in the middle of a scene, or the bottom may have the ability to revoke consent for a relationship as a whole, but not for a particular scene.

Safewords are, by definition, not commonly used words during any kind of play. Words such as no, stop, and don't, are often not appropriate as a safeword if the roleplaying aspect includes the illusion of non-consent. A safeword is a word or phrase, usually something both parties can remember and recognize and not a word that might be used playfully during a scene (such asstop or don't), that is called out when things are either not going as planned or have crossed a threshold one cannot handle. The most commonly used safewords are red and yellow, with redmeaning that play must stop immediately, and "yellow" meaning that the activity needs to slow down. At most clubs and group-organized BDSM parties and events, Dungeon monitors(DMs) provide an additional safety net for the people playing there, ensuring that house rules are followed and safewords respected.