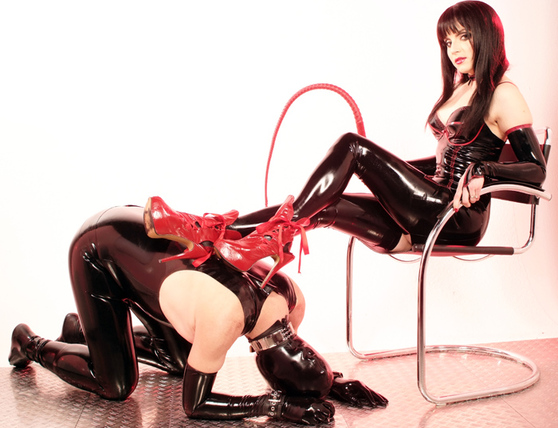 The term discipline describes psychological restraining, with the use of rules and punishment to control overt behavior. Punishment can be pain caused physically (such as caning), humiliation caused psychologically (such as a public flagellation) or loss of freedom caused physically (for example, chaining the submissive partner to the foot of a bed). Another aspect is the structured training of the Bottom.

Examples of mentally oriented practices are education games, during which the dominant requires certain forms of behavior from the submissive. Special forms include erotic roleplay like ageplay, in which a difference in age, either real or enacted, formulates the background; or petplay. Concerted deployed sexual rejection exercised on the partner can be an aspect of Dominance and Submission as well. The most established and probably most cliché set form of dominance and submission is Dominance and slavery. These can be administered for the short duration of a session among otherwise-emancipated partners, but also can be integrated into everyday life indefinitely. In a few relationships, it leads as far as total submission of one partner in the truest sense of the phrase total power exchange (frequently abbreviated as TPE). Compensating elements of the total dominance and submission are care and devotion complementing one another, thus facilitating stable relationships. The consensual submission of the submissive is sometimes demonstrated to others by symbols indicating his/her belonging to the dominant, such as wearing a collar, special tattoos, piercings, a very short haircut or a bald head.

Often, "slave contracts" are set out in writing to record the formal consent of the parties to the power exchange, stating their common vision of the relationship dynamic. The purpose of this kind of agreement is primarily to encourage discussion and negotiation in advance, and then to document that understanding for the benefit of all parties. Such documents have not been recognized as being legally binding, nor are they intended to be. These agreements are binding in the sense that the parties have the expectation that the negotiated rules will be followed. Often other friends and community members may witness the signing of such a document in a ceremony, and so parties violating their agreement can result in loss of face, respect or status with their friends in the community.

In D/S, the Dominant is the Top and the submissive is the Bottom. In S/M, the Sadist is usually the Top and the Masochist the Bottom, but these roles are frequently more complicated or jumbled (as in the case of being dominant, masochists who may arrange for their submissive to carry out s/m activities on them). As in B/D, the declaration of the Top/Bottom may be required, though sadomasochists may also play without any Power Exchange at all, with both partners equally in control of the play.